Experience: Engaged in the film, music and television industry and other media related activities for last 18 years.

The strongest pillar of RCP or we can also say the backbone of RCP is our Multifaceted, Versatile and Dynamic Producer Tejoraj Patwal, who was earlier engaged in various activities like Sports, Music, Fashion and I.T. (Information Technology) Former national level Table Tennis player, a lyricist, a swimmer, a skater, horse rider, cyclist, dancer and car stunt driver and a quite melodious singer with one song recorded for his own satisfaction in his old friend’s Recording Studio. He completed fashion designing course from Meerut and become a very good fashion designer who also won prize for his distinguish work in fashion arena and operated a fashion boutique for three years, later turned to I.T. and worked for more than a decade for I.T. domain.

Mr. Tejoraj Patwal always kept top position for every domain he worked with. He worked for so many years as Chief Information Security Consultant and later achieved more certificate and credentials as Certified Ethical Hacker and Computer Hacking Forensic Investigator and many more prestigious certifications from I.T. industry and offered his services to many Law Enforcement Agencies working as a freelance Information Security Consultant.

He spent almost 10 years in Meerut, and during his career in fashion designing he came in touch with Tina i.e. Chitrangada Singh (acting career from Sudhir Mishra’s ‘Hazaaron Khwaishein Aisi’ to ‘Yeh Saali Zindagi’ and so on) and also designed a beautiful dress for her for A Designer’s contest.

Even after spending many precious years to his tremendous careers as in multiple domains he was still not satisfied somewhere deep within his heart and thus he just took a dramatic turn to Film and TV Production and found him more satisfied and comfortable along with existing Real Estate,Refinery and Energy businesses.

He is now working actively for Dhaad Natya Mandal, Uttarakhand with Mr. Kailash Kandwal for theatre activities and started producing plays and TV programs and also working with Mr. Vicky Yogi for producing regional films such as Garhwali, Bhojpuri, Haryanvi and other regional films.

Now, this 1975 model Producer with all his great desire to do something ‘HAT KE’ ya yun kahiye ki sabse alag andaaz mein, wants to utilize his experience and analytical skills in ‘Production’.

In an unusual sequence of fortunate events, Mr. Vyankat Pundeer (Teepu Sultan – Yess, it’s his nick name which everybody loves to call him by) entered into the competitive world of feature filmmaking from a background in Science, Electronics and Information Technology. Teepu epitomizes the modern Renaissance Man, having devoted much of his earlier life to listening music and watching movies of almost every kind, painting, filmmaking, photography, creative writing and musical composition. His determined obsession with the filmmaking process and his tendency to maintain a large degree of control over each of its components reveals the kind of creative drive that independent filmmakers revel in.

Teepu’s relentless artistic experimentation and his drive to convey the neuroses and paranoia that plagued him during his upbringing led him towards the formation of a production house. Social events and importance of awareness for these events became an intriguing feature of his work, and one that led to his interest in becoming a founder member of Real Caliber Productions.

“At the beginning of Real Caliber Productions we had a very good opportunity, A very good Cause, which came to us to start production with a vision for doordarshan in our minds, that too when we were approached by some Mass Comm Students/ Teachers with their proposal to produce a short film on the occasion of ‘International Girl Child day’. At the same time we came to know that Madhya Pradesh Government is also planning to start ‘Beti Bachao Abhiyan’ from October 5, 2011. From this inspiration, Real Caliber Productions produced its first short film, Beti (2011) – A short film on Girl Child based on the story of Mrs. Sadhana Sharma, a socialist.” – Mr. Vyankat Pundeer.

Though, later there was a very sad news broadcasted on TV that just very next day of ‘Beti Bachao Abhiyan’ a three day old girl was found buried but now alive and in custody of MP government.

Teepu’s innovative ideas caught the attention of a number of art lovers, many of which offered him funding to create short films of a similar type. While the early project didn’t succeed in its initial incarnation, our fist short film ‘Beti’ was approved by doordarshan and the investors gave RCP their approval to start their projects and make some short films on the subjects required by society.

Before beginning production on the shoestring-budget ‘Beti��� (2011), which was to be RCP’s first short film release. Mr. Vyankat acted as co-producer and special effects supervisor on the film during its production, and sometimes during just a shooting of one or two shots at a time. Every frame was carefully considered in accordance with Teepu’s perfectionist attitude. Not only was ‘Beti’ the film that established Teepu’s trademark brand of social commentary in relation to an analysis of the seedy, macabre reality hidden beneath the glossy façade of routine suburban life, but marked the beginning of his association with producer Tejoraj Patwal and with an another friend  to form, start and establish their venture Real Caliber Productions. The film ‘Beti’  is considered by many to be most personal and most accomplished effort.

Can you see your true friends

Who are with you till the end?

I’ll pick you up for a ride

Through the Clouds, Past the Stars,

Nowhere you could bring me is too far. 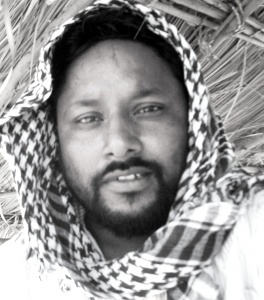 Our Skyrider Sudeep penetrated the ozone layer for his first landing on earth on September 13, 1972 in Guniyal Village (Bodasaari), Near Lansdowne, Distt. Pauri Garhwal. He attended his mother’s school for His primary education till 8th standard. Later Came to Dehradun and after completing further higher education like B.A., M.A. and L.L.B. he worked as a Lawyer for five years in the Court of Law, Dehradun.

Even after spending his five precious years to his tremendous career as a Lawyer he was still not satisfied somewhere deep within his heart and thus he just took a dramatic turn to theatre and acting and found him more satisfied. His love and passion with acting and creative thoughts fascinated him to Mumbai – The Dream City.

He got some short but noticeable roles in A.R. Rehman’s Musical movie like ‘ADA – A way of Life’ and Ashok Dhingra’s ‘Banegi Apni Baat’.

Short films, documentaries and constant interest in writing really gave him strength and recognition, but his inner desires and fascination to his motherland again turned him to Dehradun in 2010, now he is taking initiative to invite Mumbai’ans to give more opportunities to new comers from Uttarakhand.

He is now working actively for Dhaad Natya Mandal, Uttarakhand with Mr. Kailash Kandwal for theatre activities and playing the role of an actor in theatre and other responsible roles in production also.

He is a very good friend of every team member of Real Caliber Productions Management Team, and has a great tuning and understanding with them. The culture of Uttarakhand is hidden in lots of short stories and literature, and with Real Caliber Sudeep is wishing to give an exposure to Uttarakhand Culture through plays, movies and documentaries in front of common man and the rest of the world. 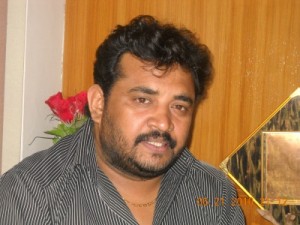 Mr. Vicky Yogi is a man with the most popular post-modern proponents of cinematic surrealism, whose dedication to the expression of pure art through the filmic medium has remained untarnished in the face of commercial demand for ‘sellable’ product. His characteristic blend with any character complexities, resonant social commentary and subtle, disturbing, dreamlike sequences of variety films have transformed the small-town actor/director into a cult icon, whose films are some of the most-anticipated amongst critics and audiences alike.

Along with the job of a Director he is also playing successful roles of Producer and an Actor, but in his own words he is much fascinated towards direction. As in the movie world, the Director is king. The director of a movie is the commander and chief of a set. What he or she says goes everything from the look of the overall picture to the action contained within. They literally direct the movements of the actors, the choices of the shots, the rewrites of the script and the final edits. The director works closely with all major departments to make sure the project has all the elements they need. From the Cinematographer to the Gaffer to the Editor, they all take their direction from the Director.

Mr. Vicky Yogi (Vinod) born in Banaras, UttarPradesh is an Actor / Producer and an Independent Feature Film Director currently residing in Mumbai and Nainital, nowadays aggressively working for Uttarakhandi and other regional films like Haryaanvi and Bhojpuri for which usually the budgets are smaller, the cast a bit less known and the production support staff a lot smaller. But it’s an opportunity for unknown or less known artists to get an opportunity to show the entertainment community what they are capable of.

Mr. Vicky Yogi very well knows that the job of a Film Director is high profile and highly lucrative with many well known film directors who are just as famous and making as much or more than the stars they direct. Although he never joined a film school but as with any entertainment job, it often comes down to whom you know. Considering many of the other people you meet and work with in film school or in industry will go on to successful entertainment careers, knowing them on a personal basis really helped him as well.

Mr. Vicky Yogi has worked with most of the leading theatre groups such as IPTA. He had also been attached with Bharat Gyan Vigyan Samiti and Manav Vikas Seva Sansthan as a Society President for last 13 years. After having taken theatre experience with most of the esteemed groups, he still wanted to explore new concepts to satisfy his inner artist & to prepare a new platform for new talents. So, he kept on working with Nukkar Naataks in many roles from actor to writer and director throughout the India atleast 30 times and also kept on managing events in various places like Uttarakhand, Surat(Gujrat), Chandigarh, Delhi, Lucknow and Mumbai.

This versatile talent is also currently working as an Editor of ‘The Hill Today’ weekly news paper & magazine published from Haldwani, Nainital. 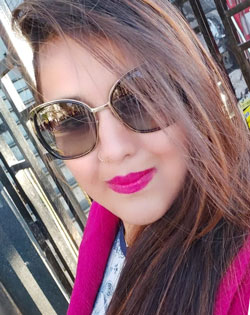 Sheenu Kaur is an experienced multi-talented thinker and doer with a background in management and production and 7+ years of experience in handling many projects. 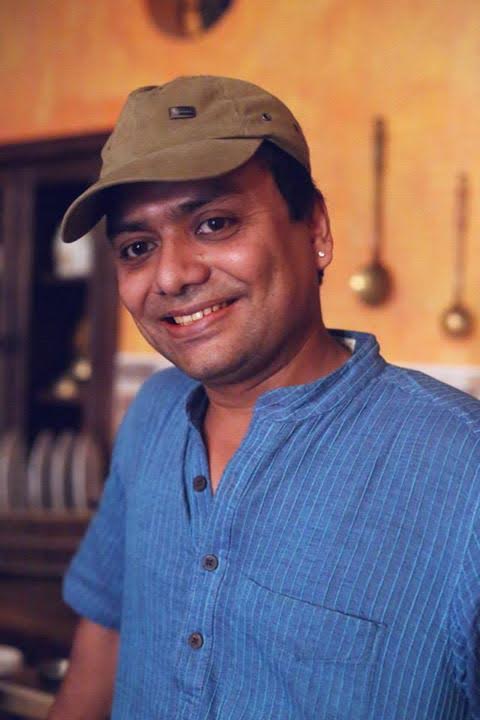